Tuesday was such a fun day

Jannette came over to play on Tuesday afternoon. We had such a great time chatting and visiting, and sewing. It has been so very long since I have had company to sew with. At least a couple of years, if not longer. I am hoping we can do it again, soon.
I pulled out my UFO for July, which happened to be another Judy Martin pattern. It is from her book The Creative Pattern Book and is called Grandmother's Diamond Ring. It is quite a challenge. 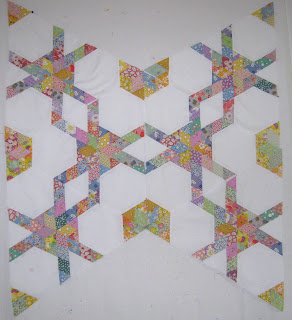 I already had all the coloured diamonds and triangle units pieced, so I am now adding them to the background shapes. I have found, however, that I wasn't to terribly accurate in my piecing when I was sewing them together, so some of them are going to be a bit wonky. Hopefully, once it is all sewn together, it won't end up too distorted. But I must confess that there is a lot of fudging going on. It is actually going fairly quickly, even with the fudge factor, so I'm hoping to have most of it pieced together by the time I go back to work on the weekend.
And our new front door came today, and was installed by a couple of really nice young men, who were quite good at what they were doing. As far as I can tell, that is. Now we won't need to hang a quilt over the door to keep out the wind next winter and  we don't have to hold the screen part of the screen door in place with duct tape. The quilter in me really likes the way the curves on the top of the screen door pick up the curve of the little window in the door. All in all, a couple of really good days. 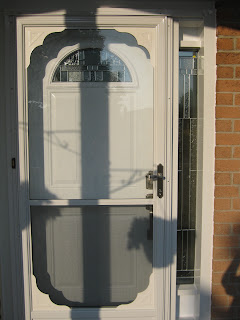